The Jaffrey Park Theatre has a long history that began in 1922. The Park Theatre was the center of community life as a movie and vaudeville house for 54 years and in 1976 became a retail store and warehouse. In 2005 The Park Theatre Corporation decided to purchase the building and renovate the historical site. Almost 20 years later The Park Theatre has been rejuvenated and ready to provide artistic, cultural, entertainment and educational programs and activities for the residents of and visitors to the communities of the Monadnock Region of New Hampshire.

The Park Theatre was rebuilt as a sustainable, state-of-the-art film and performing arts center, featuring two auditoriums and presenting movies, live theatre, including children’s productions, concerts, live acts, lectures and symposiums as well as a venue for community and business gatherings. 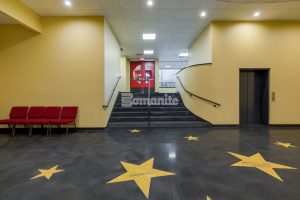 Calling up BKA Architects, The Park Theatre Corporation requested that the building façade use an Art Deco period design to recapture an element of sentimentality for the 1920s era and as homage to the original theatre with the founder’s home on top. With the design intent, they knew they wanted a polished exposed concrete floor and when the time came in February 2019, the architect reached out to Bomanite Licensee, Premier Concrete Construction, LLC to discuss the possibilities. With little under 5,000 square feet to work with, Premier Concrete met with Caroline K. Hollister, Trustee, President and Treasurer of The Park Theatre and Matt Pelletier of BKA Architects at their Boston Decorative Concrete Showroom. It was at the showroom that the clients learned of the different textures and colors of concrete. 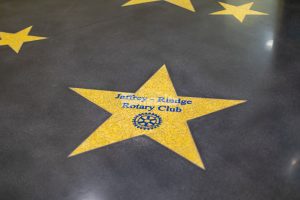 An important design element was the star sponsorships, each donor over $10,000 received a star with their name engraved such like the California Hollywood Walk of Fame. The Bomanite Custom Polishing System Renaissance was the choice for the main lobby entrance flooring, in a dark black color, to provide a background that would make the golden stars pop off the floor. In order to achieve the deep dark color, Premier Concrete created a custom Raven Black Integral Color. Using Bomanite Integral Color provides for uniformity of color throughout the depth of the Concrete while producing durability and longevity of the concrete itself. During the polishing process Black Concrete Dye was added to the top of the colored slab to achieve the deepest darkest color possible. 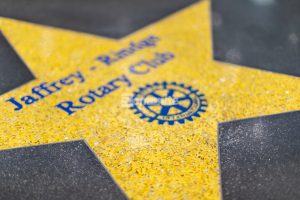 Premier Concrete crafted a solid solution for creating the stars with a molded form that was placed before the concrete was poured. Once the field of Black concrete was set and polished, forms were removed and a formulation of Bomanite Modena TG, a modern terrazzo like mix, filled the voids. The Bomanite Modena TG Bomanite Custom Polishing System used 3 different colors of yellow glass in 3 differing sizes along with touches of mirror glass to provide the bright golden contrast against the Black backdrop. Once set, each donors name was engraved into the star and displayed with a metallic epoxy for some old-world Hollywood glamour. 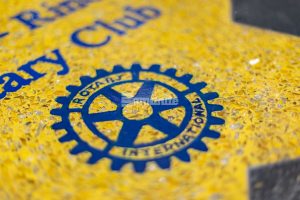 Prior to the work being started, several samples of contrasting color palettes were created and shown to the clients as well as onsite mockups. Determining the best plan to bring the Park Theatre’s vision to life was critical to the success of the space and intent of design. Premier Concrete’s showroom allowed for the clients to learn more about the possibilities of Bomanite Decorative Concrete. Samples provided the clients with ease of mind and a visual to a stunning end result.

This grand project won Premier Concrete Construction the 2020 Silver Award for the Best Bomanite Custom Polishing System Project. With Premier Concrete’s quality of work and creativity, The Park Theatre now showcases a distinct decorative detail while providing a dynamic regional center for the arts and entertainment as well as an artistic meeting place for the community.